Celebrating service and excellence in teaching and literacy

Nominate a colleague for one of our Teacher of the Year positions today! Each year, ACTELA reviews nominations for excellent educators in English and Language Arts. This year, we will be taking nominations for ELA Teachers of the Year, and these teachers will be honored at the Summer Media and Literacy Conference held on the campus of UCA. Applications are due June 1, 2019.
Click Here to Nominate a Teacher 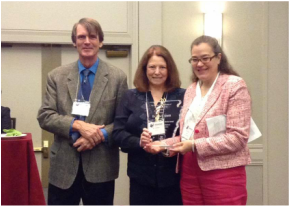 Linda Arnold receiving the Lifetime Service Award at the 2015 ACTELA Luncheon
In 2005, the executive board of the Arkansas Council of Teachers of English and Language Arts (ACTELA) instituted an award to recognize members who have contributed to the organization throughout their careers. The award is named for such a person. Winners of the Carolyn Pittman Lifetime Service Award are listed below with a brief account of their contributions, though it would be impossible to share all they have given ACTELA over their careers.

2014 Linda Arnold: Linda Arnold’s exemplary teaching career has been varied, eventful, and quintessentially Arkansan.  Her BSE and MSE degrees are from UCA, and her doctorate is from UALR.  At the beginning of her career, she was an English teacher at Conway Junior High and at Greenbrier High School. In 1981 Linda began her professorship with the UCA English Department, where she worked until retiring in 2007. At UCA, she supervised t intern teachers and taught a variety of courses:  Methods of Teaching English, World Literature, Language and Grammar Studies, and Middle Level Literature. Linda received UCA's Teaching Excellence Award for 1998. After retirement from UCA, Linda served the Office of Teacher Quality at the Arkansas Department of Education as an education consultant.  She also served as a site facilitator for the Non-Traditional Licensure Program, as a Pathwise trainer, and as a Praxis III Assessor and assessor trainer. We of ACTELA are grateful for her many years as a member of the ACTELA Executive Committee and for her service as vice-president, president, and ex-officio Board Member. With her guidance, ACTELA grew in membership and began to offer many new services.  She led ACTELA to join with other disciplines to offer our own fall conference, which gave us new financial support.

2011 Sarah Henry: Of all the members of ACTELA, Sarah is by far the most visible on the national level. She has represented our state organization at the NCTE conference for many years. She has served on national and regional committees, thus distinguishing Arkansas at the national level. Each year, Sarah has provided us with valuable information from NCTE. Sarah served as secretary of the ACTELA board for many years and contributed to all ACTELA projects and initiatives. She is retired after a distinguished career as English teacher at Parkview Arts and Sciences Magnet School.

2009 Grimsley Graham and Jo Barnes: These two valued members taught at Rogers High School and served on the ACTELA board for more years than anyone can remember. Between them, they served in nearly every board position and on every committee. Grimsley was vice-president and president of the organization. He hosted the board’s summer retreats at his family home on Greer’s Ferry Lake for many years. He was always the ultimate host wherever we were. He is a true gentleman whose influence continues to be felt. Jo Barnes served as secretary and for many years as the NCTE Literary Magazine representative for Arkansas. In that capacity, she encouraged submissions for the literary magazine award. She presented sessions at ACC every year, and she served as hostess in the hospitality suite. Her grace and poise represented ACTELA in the best possible ways.

2008 Rob Lamm: A faculty member at Arkansas State University, Rob continues to be the go-to person for ACC sessions. Along with Grimsley and Jo, Rob established ACTELA as a strong organization through his leadership and intellect. He brought and still brings to ACTELA an intellectual awareness that raises all of us to another level. During his years on the board, he served as president for several terms. He single-handedly produced the Arkansas Anthology and started the Teachers of the Year Awards. It was because of his vision and hard work that the anthology and the TOY awards continue.

2007 Susan Reich: For years, Susan represented ACTELA on the ACC board. She single-handedly ran the program for ACTELA, plus took care of all the other responsibilities associated with the conference. Her leadership in this regard set the stage for the success our organization now enjoys. She was a stalwart member of the board, taking a role in all activities with a cheerful spirit and a love of her subject and her students.

2006 Gloria Jean King: Over the years, Gloria acted as our clearing house for research. Without fail, she brought copies of articles for inclusion in our luncheon folders at ACC. She sought out teaching strategies and plans to share with our members. In addition, she was the most engaging person to ever staff our membership table. She drew people to her and once she had them, they heard everything about ACTELA. Gloria served on the board and on numerous committees throughout her tenure.

2005 Carolyn Pittman:  Carolyn served on the executive board through her position as the English Educator at the Arkansas Department of Education. In her role as ADE liaison, she exemplified the service the award is meant to recognize. She was always supportive, attending board meetings and advising the board on critical issues only she could bring before the board. She also served on many committees and worked tirelessly on ACTELA projects. When she retired from the board and her position at ADE in 2005, she was the recipient of the first award named in her honor.